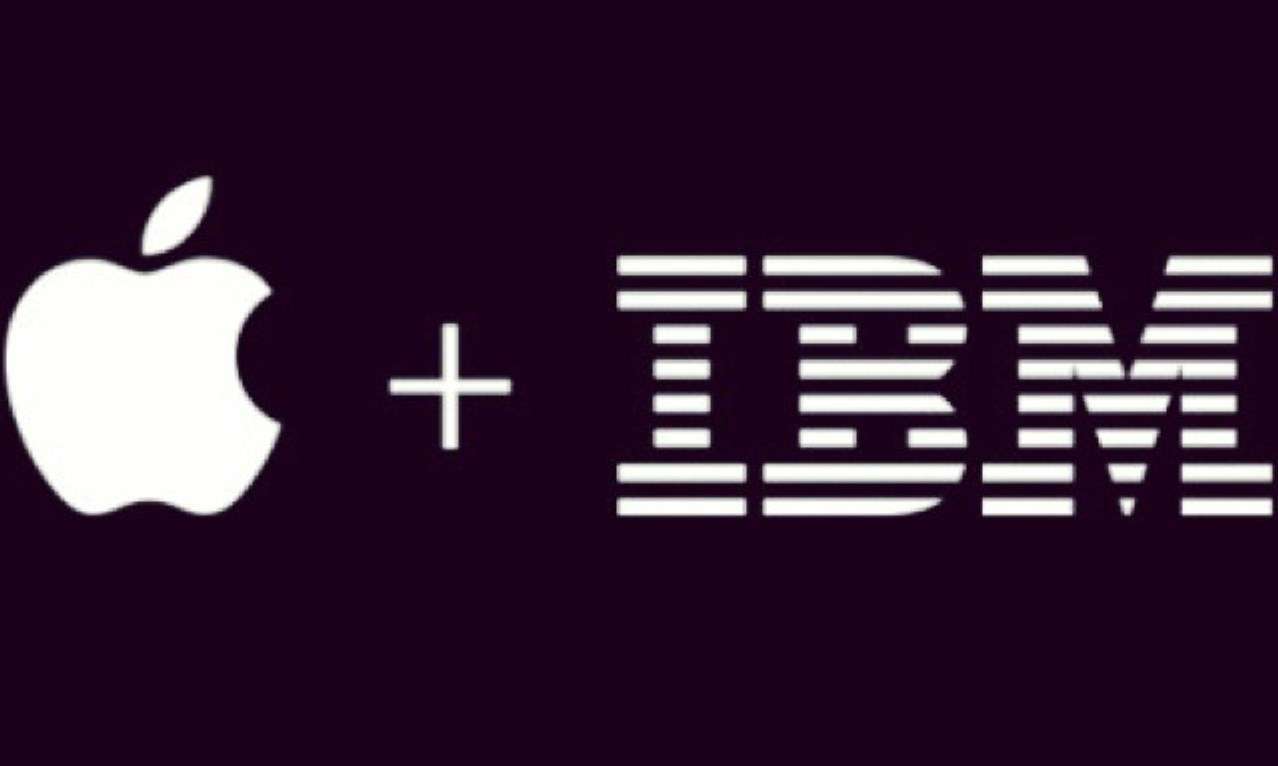 Why the CIO should care about the IBM-Apple Computer Linkup

Last month, computer scions Apple & IBM announced a collaboration to develop and market over 100 mobile applications to run on Apple’s iOS operating system, and providing business solutions for retail, healthcare, banking, telecom, travel, and logistics. In addition, IBM will provide enterprise support for the Apple platforms in corporate and government IT environments. The first applications are slated to be available as soon as this autumn, coordinated with Apple’s release of iOS 8. This is not the first Apple-IBM joint effort, and though previous ones met with mixed results, this one signals irreversible changes in the IT ecosphere, with implications far greater than whatever successes or failures IBM and Apple are able to achieve from their new deal.

It will be news to no veteran of any IT discipline, that Microsoft’s initial success was largely due to IBM’s contracting of Bill Gates and collaborator Paul Allen to develop the PC-DOS operating system to run on IBM’s new “5150,” better known as the IBM-PC. The PC did not come about until after Apple had already obtained a dominant position in the personal computer market, with its Apple 2 series. For whatever reasons, IBM did not demand exclusivity for the PC-DOS operating system, and the seeds were sown for what became vastly different IP philosophies—not so much between IBM and Apple, but between Apple and Microsoft. Apple has pursued a closed approach, tightly integrating and controlling their hardware and software platforms, and to an extent, restricting the software that can run on those platforms. On the other hand, IBM PC clones quickly proliferated, and by the late 1990’s, IBM was left with a small share of the enterprise PC market that they created. Outside of the field of media and graphics, Apple never gained a significant presence in the corporate world, and based on their behavior and strategy, has never much been interested in one. This led to the dominance of “Wintel:” the Microsoft Windows and the Intel microprocessor platform eventually dominating both the enterprise, SMB, and consumer marketplace.

Three interesting things happened along the way. Microsoft seemed to stagnate soon after the retirement of founder Bill Gates. Apparently they were content to rely upon Windows XP and Office, while Exchange, IIS, Sharepoint and MS SQL Server milked the enterprise customers who largely had no other options. By 2000 most client-side business software was only available on the Windows platform; LINUX was still a tinkerer’s toy, and Mainframes were for databases—servers for Wintel’s PCs. Worse, while Apple was resurrecting itself from near death with products like the iPod (countered by Microsoft’s Zune flop), and later, the iPhone. Microsoft had battled Palm in the mobile wars, with initially very good operating systems, but then, even though Palm was dying as a company, Microsoft responded to the iPhone by releasing Windows Mobile 7, perhaps the worst mobile operating system ever unleashed on the public. Just as with Windows 8, it seemed that there were secret agent-saboteurs at the highest levels inside Microsoft conspiring to drive hordes of customers into the clutches of Apple.

The second thing that happened was the increase in mobile computing power meant that many tasks that required a desktop or laptop could now be done on a smartphone or sub-laptop computing device, such as a tablet, netbook, or handheld device. This, combined with the third factor, the vast increase in mobile and premises internet bandwidth giving rise to the feasibility of the cloud, meant that even the desktop was no longer so much a computing device as it had become a communications device, a client. The paradigm had in large effect shifted back to the mainframe-terminal era, but now with vastly richer communications interfaces in the terminal.

With enterprise applications now being designed cloud-native, critical applications such as ERP that previously required capital investments in computing hardware for companies, now could be sold as a service. (SaaS, or Software as a Service) With interfaces to these mission-critical apps now being browser based, we began to hear the acronym BYOD (Bring Your Own Device): Employees could access data and perform tasks using whatever interface they pleased, thank you! Perhaps Apple’s focus on the consumer experience at the expense of submitting to the mandates of corporate CIOs and CTOs had paid off, after all!

Meanwhile, IBM had long since shed any pretense of being a computer company, with the exception of very high end servers. IBM built upon its enterprise relationships, experience, and software prowess to reinvent itself as a services and software vendor and innovator that focused on the largest enterprises, scientific research, and governments. IBM still makes high end mainframe computers, but the go-to-market-strategy is such that they are to run IBM’s software platforms, and to support IBM’s services as a BPO and ITO provider. Today, $58 Billion of IBM’s $99 Billion in revenue comes from its services division. IBM soon became a cloud evangelist, because the cloud relies on enterprise software, large scale databases, services to develop and manage the resultantly complex systems, and to a lesser extent, the high-end computing power that IBM can design and build; servers to the infinite clients in desktops, laptops, tablets, entertainment devices, smart (and basic) phones, and let us not forget “the internet of things.”

IBM and Apple have tried to work together in the past. Taligent was perhaps the largest joint-venture, as they worked along with support from HP to develop an object-oriented programming environment that eventually went nowhere. OpenDoc was meant as a challenge to Microsoft’s Office suite, but after killing off Word Perfect, nothing would offer a serious challenge to Microsoft Office until the present day’s cloud based Google Apps.

IBM ignores the consumer market entirely (try to buy a real IBM product as an end user!) and Apple has a laser focus on the consumer. Apple has practically no enterprise sales force and simply does not customize its products to suit large clients, no matter how large the potential order. Again, with platform independence, wireless connectivity, and both data storage and processing now residing in the cloud, this no longer matters.

Microsoft Factor (or Not!)

Aside from its Windows operating systems, Microsoft earns a vast portion of its revenue from enterprise software. Though no longer dominant, Exchange is still the dominant mail server, the financial industry relies heavily on Microsoft’s ActiveX technology, and many companies employ Microsoft’s CRM products. Sharepoint is also dominant in the market sector it created. The rise of Open Source software in the enterprise has put a tremendous dent in Microsoft’s earning capacity and future prospects. As the Linux operating systems and the LAMP environment (Linux, Apache, MySQL, PHP) have gained enterprise respectability, CIO’s find it much harder to pay the sometimes exorbitant licensing fees that old-line software companies like Microsoft and Oracle have come to depend on. Microsoft, once a leader in mobile computing and the earliest smartphones, saw its sales evaporate to nothing—In this analyst’s opinion less because of the appeal of the iPhone, but because of the horror of Windows Mobile 7.

Now Microsoft has purchased Nokia and tried to buy its way back into the game, but almost simultaneously, has assaulted its customers with the almost unanimously hated Windows 8. In the past, one of Microsoft’s selling points was tight interoperability of their operating system across devices, but if Windows 8 drives even more people to Apple or Android devices, there will be even less reason to purchase their latest Windows Mobile smartphones or tablets. Android interfacing with Chrome & Google seems a lot more relevant to most people today than Windows Phone interfacing with Windows 8.1.

For traditional PC productivity, there are high-end features that Microsoft’s Office can do better than any competing product. Most people are not power-users though, and get all the functionality they need, plus the benefits of The Cloud, and minus the several-hundred dollar (per user, retail) price tag, from Google’s Apps. Google is also busy scoring government and enterprise wins for productivity software, and a robust e-mail platform with Exchange firmly in its targets.

Enterprise apps such as ERP and CRM, have long since begun—and in many cases, completed the migration to the cloud , especially at the high end. Oracle, SAP, SAS are all delivered via The Cloud, and as browser based applications, it doesn’t matter if the user has a Windows PC, Apple, Linux, or even ChromeOS desktop. Contact center software and even PBX phone systems are now cloud-based.

It is no coincidence that Microsoft has announced a stunning 18,000 layoffs. The corporate line is that this is due to their acquisition of Nokia, but to this analyst it looks like a defensive maneuver designed to protect revenues and shareholder value in the face of stagnating or reversing sales growth in the coming decade. The answers to the question “Why Microsoft” seem to all be less and less relevant every day. (I say this with no glee or anti-Microsoft bias, in the 1990’s I ran a Microsoft-centric VAR and up until Windows Mobile 7 and Vista, I was a loyal fan and customer).

IBM has proven to be a survivor. IBM has managed to reinvent itself as necessary and at least keep up with, if not in some cases, get out ahead of, the constant evolution in what once was called “data processing” but is now known as “information technology.” Many people were shocked when IBM jettisoned the PC business, but it turns out they knew what they were doing. SaaS, PaaS, IaaS—They all end with “Service.” IBM has become a services company that relies on its own software and hardware.

As CIOs gleefully (at least the insightful ones) embrace BYOD in the workplace, Apple knows that all it has to do is design the products that the consumer/worker wants. Now, IBM will take care of the corporate care and feeding of the CIO and IT department, and as an additional outsourcing opportunity, see to it that corporate governance, service levels, and security are maintained—all things that IBM has more experience at than perhaps anyone else.

Apple and IBM teaming up is about the decomposition of the IT ecosystem we have known for the past 3 decades. In 1990 there was datacom, and there was telecom. That distinction is effectively gone. The mainframe is back, but not it’s called the cloud. Instead of ASCII terminals, we have our choice of hardware that supports our choice of browsers.

The personal device is not based on computing anymore, it is about the human-data interface. Apple gets that. IBM gets the CIO and the needs of the enterprise. That is what this pairing is all about.