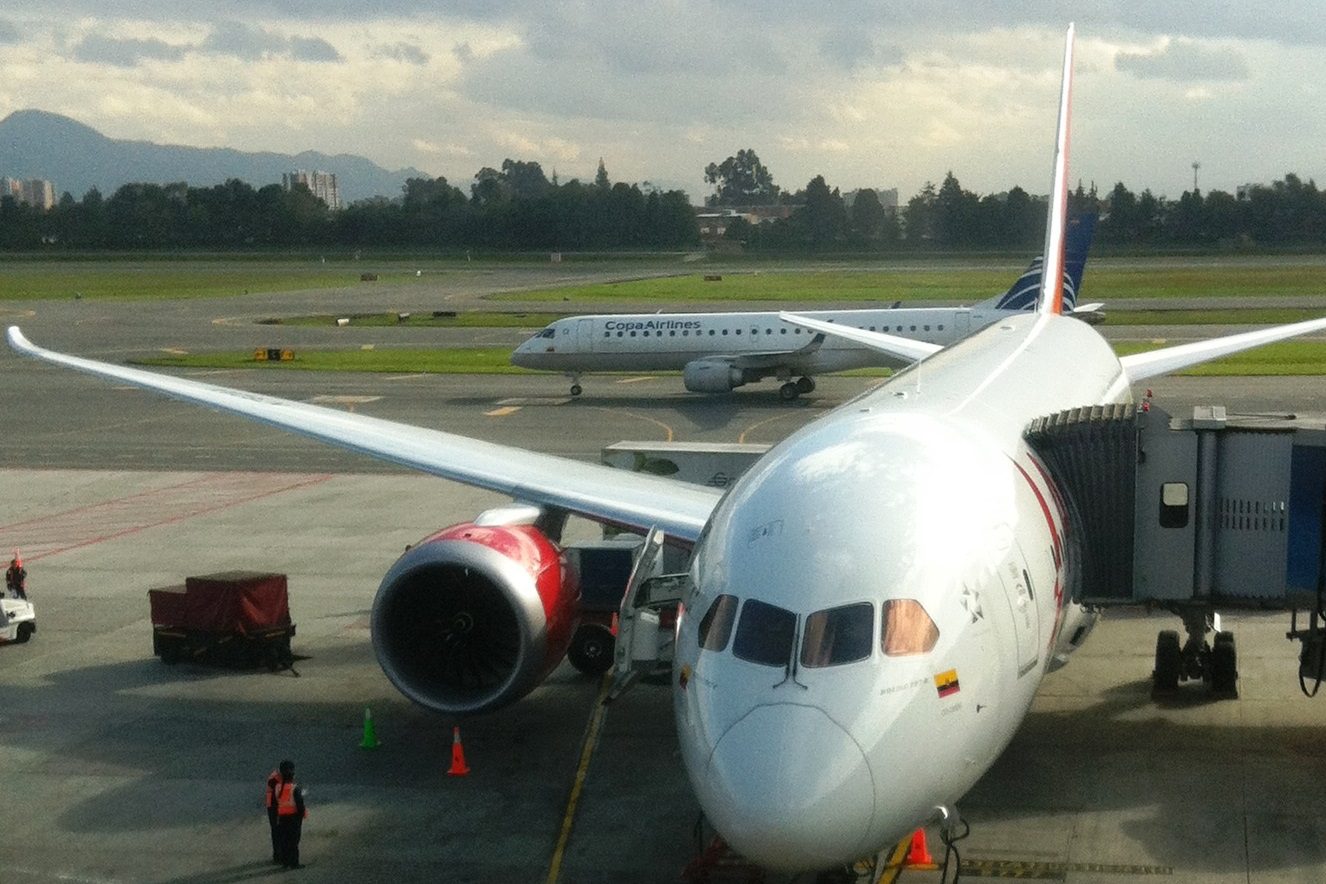 What might happen to Avianca? Will Copa purchase the Airline?

With many valuable routes and considerable infrastructure, an Avianca (NYSE:AVH, BVC: PFAVH) financial collapse would still see the company exist in some form, likely purchased at a deep discount after debt is wiped out and shareholders (United Airlines) take their losses. Precisely for this reason, the most likely savior for the airline is United Airlines in order to protect its asset value and route access. With a strong balance sheet (relatively speaking) Copa Airlines (NYSE: CPA) could conceivably take control, though there are obstacles. Copa is an all Boeing-fleet while Avianca primarily flies Airbus aircraft except for some wide-bodyBoeing 787s. Copa also is an almost entirely international airline, while Avianca flies extensive domestic routes.

At the right price, and with United’s prompting and support, Avianca could make sense for Copa. They are both members of Star Alliance and were already working on a three-way deal to increase cooperation. A larger Copa could compete head-to-head with LATAM Airlines (NYSE:LATAM), even though it may not want to. Copa has focused on having a strong regional presence and is in many cases the only alternative for regional travelers who lack US visitors’ visas. For example, without flying through Miami, Copa is the only practical choice to fly between most South & Central American cities and Caribbean islands. Travelers in transit through Panamá’s Tocumen International Airport (PTY) do not need to go through immigration but connect to international flights as if they were in a domestic airport.

That would be a difficult question to answer even under normal circumstances. Delta Airlines (NYSE:DAL) just snatched Chile-based LATAM from its alliance with American Airlines (NASDAQ:AAL), leaving OneWorld without a significant partner in the region. American Airlines gave excess money away in stock buyback schemes before the Coronavirus Pandemic, leaving it unequipped to handle the crisis and seeking bailouts itself.

United Airlines is prohibited by union contracts from simply gobbling up Avianca, and even beyond the regulatory and contractual hurdles, it is almost impossible to conceive of United Airlines-branded flights between small Colombian cities like Monteria and Villavicencio that few Americans have ever heard of.

No airline buyer outside of the Americas comes to mind. The industry is struggling globally and there is not enough transoceanic travel to make Avianca’s routes a valuable addition to an European (much less EMEA or APAC) network.

One conceivable alternative would be a very large private equity or hedge fund, but even in such case, there would be little reason to make a move before a bankruptcy.

Should the Colombian government bailout Avianca, it would have to provide enough money to cover the airline’s debt and operational expenses. Precisely because the airline is legally based in Panamá and subject to US securities laws, the government would be extremely limited in legal options to force creditors to its will. The Colombian government is already facing its own financial emergency due to the Coronavirus Pandemic and calls to prioritize families & small businesses over “elites.” It doesn’t help public perception that the President’s sister is a top executive with Avianca.

A nationalized airline, the government taking control would see legal challenges from competitors, and also complications on international routes. What happens when tough business decisions such as additional layoffs or route closures become political decisions in already deeply divided Colombia?

Should Avianca be unable to find an investor willing to swallow its significant debt, operational challenges, and certain scarcity of revenues in the post-Pandemic world (whenever that might arrive), it would likely be liquidated. The aircraft are already heavily encumbered and would go to lessors and other lienholders. The airline flies many routes that have not had much competition in the past, and there still will be a certain amount of domestic and international demand in Colombia.

Colombia’s government owned SATENA has specialized in flying routes between Colombian destinations that don’t generate enough demand to interest large commercial airlines. There is already a clamor within the country by some to support SATENA and not Avianca, though SATENA is a small, domestic-only carrier owned by the Ministry of Defense that operates no large jets or international routes.

Privately held Viva Air has already been in growth mode and attacking Avianca’s network and financial margins. The airline, based outside of Medellín and controlled by Irelandia Aviation (the same group behind RyanAir in Europe, Viva Aerobus and Allegiant in the US) focuses on operational efficiency with its low-cost model, and doesn’t bother with VIP lounges, first class sections, or loyalty programs. What it does offer is airfares so low in Colombia that they literally compete with intercity bus fares. CEO Felix Antelo told me in a recent conversation that maybe 20% of their passengers are new to air travel, as they can finally afford the fares.

When Viva Air comes into new cities, like their recent arrival in Cali, competing airlines like LATAM and Avianca lower their fares between 40-60%; what they call the “Viva Effect.” Avianca recently created new ultra-cheap fare classes in response last year, hoping to compete. They also cut loyalty benefits for frequent flyers, a nasty surprise to those used to waiting in their lounges due to delayed or canceled flights.

The most likely scenario for Viva Air would be to pick up Colombian domestic routes on the cheap, and conceivably even some of its assets. Avianca opened a modern maintenance facility to service its fleets of Airbus aircraft at Medellín’s airport in the suburb of Rionegro, literally outside the window of Viva Air’s corporate headquarters. At the right price, moving into many of Avianca’s domestic routes, and some of its international ones—Viva already flies to the US and operates a fairly complete domestic network in Peru—could make sense. Nobody locally is better positioned.

What is inconceivable however, would be to see Viva Air take on any of Avianca’s debt or operational liabilities.

So what does the future hold?

A government bailout will be difficult for the politically fragile President Ivan Duque, or the financially fragile Colombian government. Colombians are already howling at the notion of a potential bailout by the Colombian taxpayers of what some see as essentially as a United Airlines asset.

Bogotá politician Luis Ernesto Gómez tweets that “When they speak of saving Avianca, they are in reality talking about saving United Airlines and Kingsland Holdings.

Many Avianca employees will lose their jobs no matter what because of the pandemic and economic depression. Whoever assumes Avianca’s routes in the event of a liquidation, will also need personnel to operate them, and maintain the aircraft so the jobs will not completely go away. The employer would just be different.

Avianca has already unsustainable debt levels and cannot be profitable in the near future based on its current capital structure and the global economic conditions. Nobody has more to lose in an Avianca collapse than United Airlines, so this analyst sees the most likely scenario some type of United-backed structural reorganization. United of course, would rather see the Colombian government take on the responsibility, and is likely to indirectly beat the “jobs” mantra with the hopes of a favorable outcome. Should the rescue of Avianca employees take precedence over the millions of others also losing their jobs in the Andean nation? The government can’t bail out everyone. Should Avianca employees receive preferential treatment over the countless thousands that work in independent hotels, bus lines, or travel attractions?

Will Copa be involved? Conceivable, but this analyst doubts they have much enthusiasm for such an adventure. Copa’s model seems to be working. The airline has good cash, a good credit rating, and a very defensible market position that the Coronavirus Pandemic will not change.

Only time will tell. Do you see any alternative scenarios not covered above?