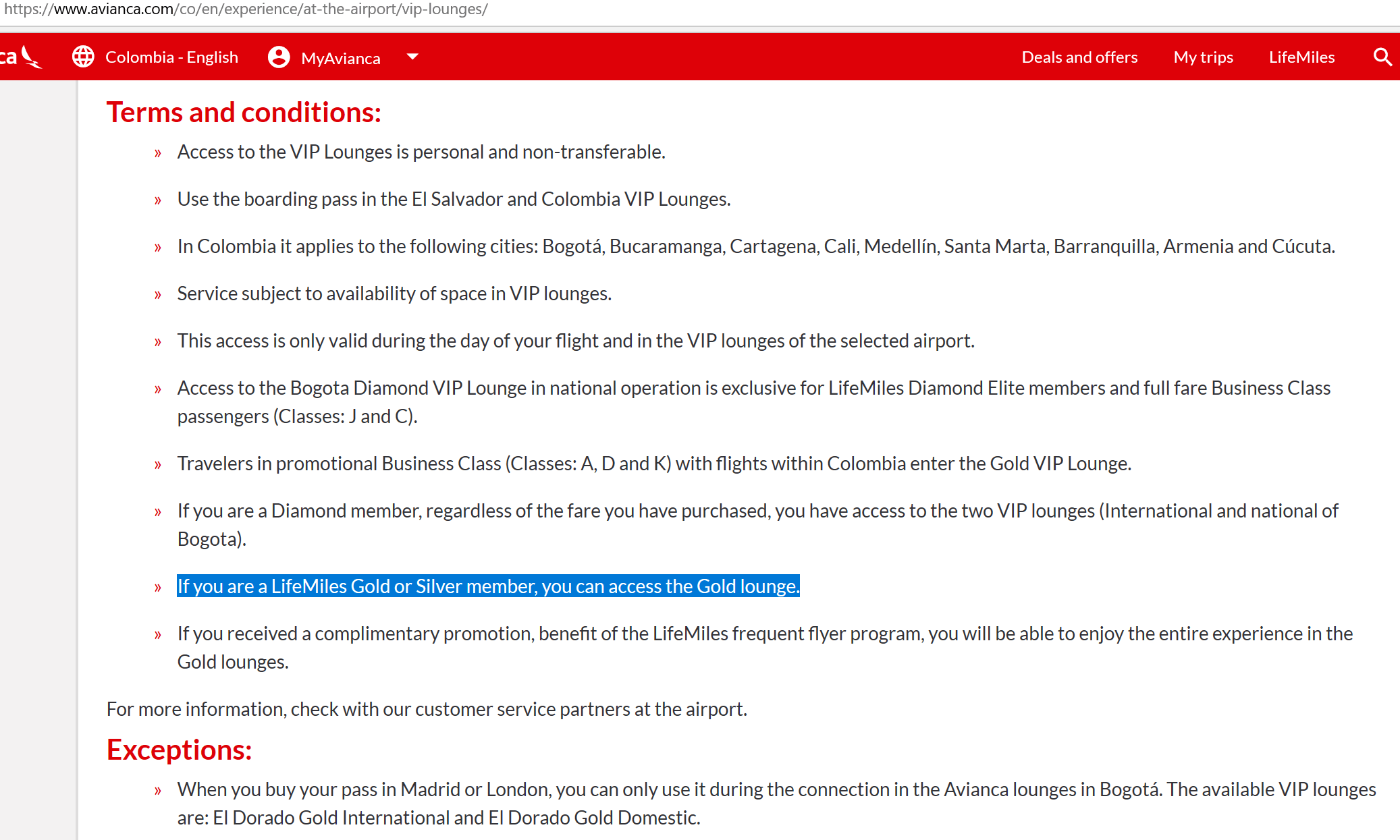 Avianca once had sterling service. But now, suffering from bad credit and embroiled in drama, they seem to be taking out their frustration on customers. They can’t compete on price; they won’t compete on service; the boardroom is a soap opera with everything but the sex, and they are under investigation by the Colombian government for systematic noncompliance of passenger itineraries and violation of passengers’ contracts of carriage.

Here in Colombia, Spirit is expanding with new routes to Barranquilla and Bucaramanga. I have admired Felix Antelo’s stewardship of Viva Air since his appointment, and the airline is growing. New airlines JetSmart and Plus Ultra are arriving with international flights. Every day, flyers have more choice…“But I have to work, I need the lounge,” I would tell myself as I paid more for Avianca flights, booking directly on their corporate travel website.

Now, apparently, for multitudes of loyal flyers, that is gone too, without public notice, and contrary to their clearly stated policy on their website, as you can see in the above image. Friday, my flight, Avianca 9328 (rated “Very Poor” for performance by FlightStats) had just been canceled, as are so many Avianca flights these days, so at least I would be able to sit down, charge my phone, and check messages, as I had done with Avianca for the past several years.  But I was greeted at the lounge entrance with: “You cannot come in here. As of January 1, Lifemiles Silver members no longer have access to this lounge. You can purchase a day pass. How would you like to pay?”

Beware the lollipop of mediocrity. Lick it once and you suck forever.

Surprisingly, Avianca does not have a Silver Elite lounge at its home hub airport of El Dorado International in Bogotá. But not to worry, the longstanding policy as clearly written on the company’s website (see image above, taken 25 January 2020) says “If you are a LifeMiles Gold or Silver member, you can access the Gold lounge.”

See also: “…their solutions — and approach — left me with no desire to do any business with the airline again.”

Meanwhile business travelers on domestic flights within Colombia would travel light. Most of my flights for example, see me flying to a meeting in Bogotá, Cali or Barranquilla, and returning to Medellín the same day. No luggage. The flights are under an hour so even the smaller seat pitch and more spartan conditions of budget carriers are less of a factor. No meals are served on domestic flights in Colombia, not even in 1st class; you get a bigger seat, up front, nothing more.

A lot has changed in the past few years. JetBlue, Spirit, Viva Air, Plus Ultra, JetSmart, Wingo, and Interjet now offer international connectivity to and from Colombia in addition to Avianca & the “legacy” US carriers like Delta, American Airlines & United; and the other international carriers such as Copa, AeroMexico, and the European carriers like Iberia & Lufthansa. Domestically, while Avianca can’t keep its planes flying consistently, Viva Air is winning accolades for on-time performance. You don’t get a lounge, but it seems that you need one with Avianca primarily because they are delayed or cancelling flights so frequently. Passengers have the option of flying between Bogotá & Medellín on Colombia’s government-owned Satena Airlines from Medellín’s Olaya Herrera metro airport in the city, avoiding the trek out of the valley up to Rionegro’s José Maria Córdova International Airport.

Travelers would rather get home on time than sit in a lounge because their flight has been delayed or canceled. In such cases, the lounge is not a perk but a consolation.

Avianca is so far away from its past reputation that Colombia’s government has opened a formal investigation into the airline “systematically” violating passenger rights and its obligations as a carrier. I suppose they intend to fix their problems by screwing us passengers. Well, they are now controlled by United Airlines, already infamous for kicking its own frequent flyers out of lounges, breaking guitars, having guards breaking passenger faces. and the death of bunny rabbits, Avianca has already been charged and the Colombian government is investigating them. I don’t want to stick around to find out, not when we passengers now have choices.

See also: “Calling Avianca for anything is extremely painful…”

When I moved to Colombia in 2014, I was editor in chief of a publication called Customer Experience Report. As an editor and analyst, it was my job to study and write about the customer experience delivered by companies, so I got to know something about the subject. Michael Treacy in his book, “The Discipline of Market Leaders” posits that to be a great company you have to be good at all three, but you have to really excel at one: Either Operational Excellence (Southwest, Copa, who won OAG’s Most Punctual Airline In The World), Customer Delight/Intimacy (Emirates, Cathay Pacific), or Product Innovation. All major airlines fly either Boeing or Airbus, so the third isn’t really in play for airlines. But when you both fail operationally and piss off customers; all at higher prices, your destiny is severely limited.

My previous opinion and high esteem of Avianca is well documented; you can see by clicking here what I wrote in 2016 calling Avianca “my preferred Airline,” a lot can change in 4 years. For the past 3 years, I would book directly on Avianca’s “Programa Preferencia” corporate website, meaning more profit for the airline by not sharing commission with aggregators such as Expedia, not even checking competitive carriers, and always purchasing the more expensive fare classes, never the “promotional fares.” One December several years ago, I flew to Barranquilla & back, connecting through Bogotá, just because I was 4 segments short of elite status. I flew to Ernesto Cortissoz International AIrport (BAQ), went into the city, had a fish lunch, and returned, all for Avianca & “Lifemiles Elite.” I would imagine, fit the definition of an ideal passenger. I even had it written into my consulting contracts that I would be flown on Star Alliance airlines: Avianca, Copa & United. Below is an excerpt from an actual contract of mine. Trust me, my travel policy is changing for 2020.

With the frequent delays and cancellations, I experienced last year on Avianca, I think it was inertia that kept me booking with them and I will admit, not even checking competitive fares. As an analyst, I have written about the effects of customer inertia. But, I supposed I should thank them for this, they woke me up. Time to see what else is out there.