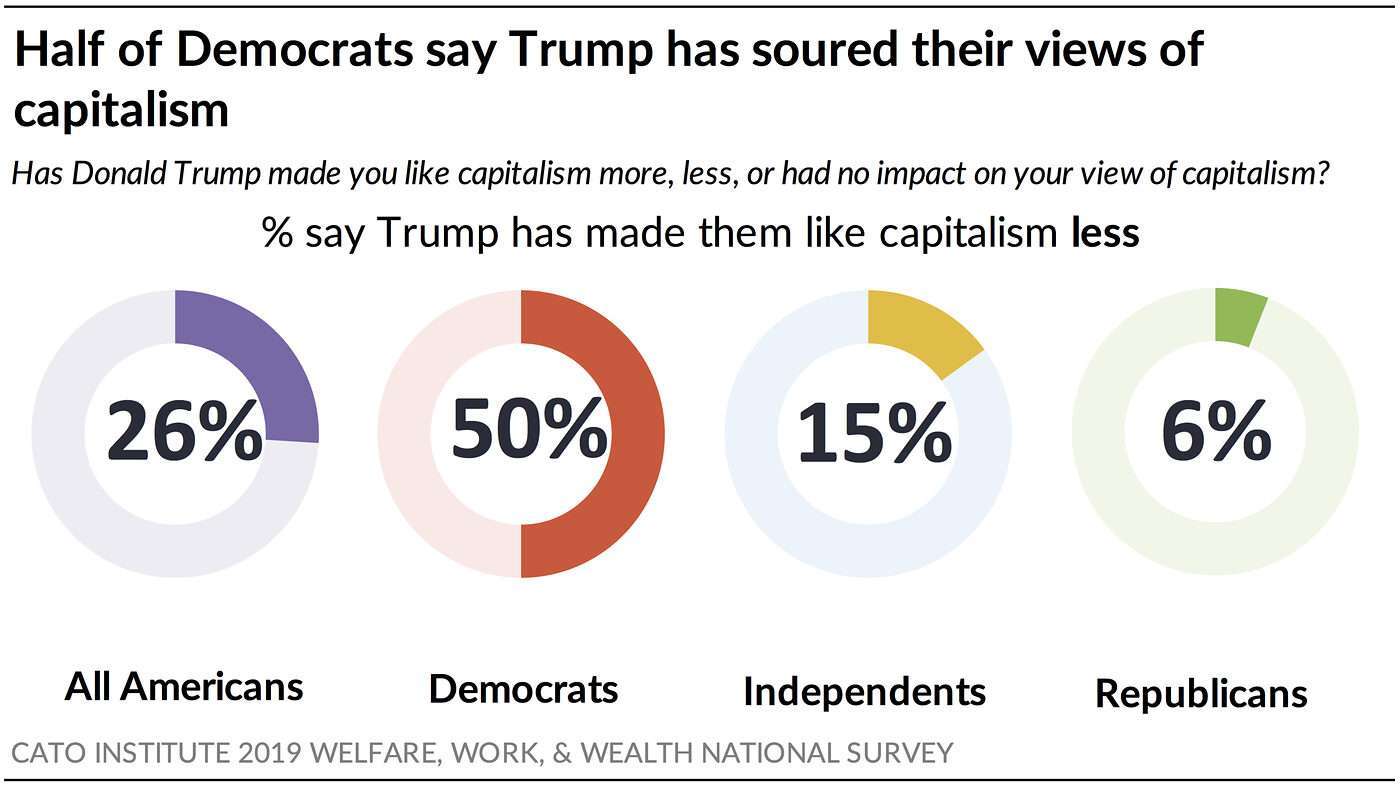 My favorite think-tank, the libertarian Cato Institute has come out with a survey that both reveals concerns and shows some optimism when it comes to US voter attitudes on poverty, wealth and work. One thing is clear: The Trump administration has been polarizing and has pushed at least some US Democrat partisans further into the clutches of socialism. My personal take is that Trump is probably the worst poster-boy imaginable for capitalism. But, according to the poll while that damage has been done, underlying voter sentiment in the US still friendly towards individual enterprise and hasn’t gone completely statist.

Poll Summary: 84% Say There’s Nothing Wrong with Trying to Make as Much Money as Possible, 79% Say Economic Growth Will Better Help People Climb out of Poverty than More Welfare Spending, Democrats Turn Toward Socialism Under Trump

The Cato 2019 Welfare, Work, and Wealth National Survey, a new national poll of 1,700 U.S. adults, finds that 84% of Americans say there is nothing wrong with trying to make as much money as one honestly can. The survey also finds the public believes that growing the economic pie benefits more than just the wealthy: 79% say economic growth will better help people climb out of poverty than more welfare spending.

More Democrats today have favorable views of socialism (64%) than capitalism (45%). But before Trump took office, polls found Democrats were about equally favorable toward capitalism (58%) and socialism (56%). Most Democrats credit Trump with this shift: 50% say Trump has made them “like capitalism less.”

Wealth redistribution divides Democrats. While 69% of strong liberals agree that wealth should be redistributed from rich to poor, 53% of moderate liberals disagree. However, Democrats are united in support for raising top marginal tax rates (73%) and raising taxes on incomes above $200,000 (81%). Republicans oppose all three: 70% oppose raising top marginal tax rates, 62% oppose raising taxes on incomes above $200,000, and 83% oppose redistributing wealth. Independents support raising the wealthy’s income taxes but do not support wealth redistribution.

55% Believe the Distribution of Wealth in the U.S. Is Unfair

A majority (55%) of Americans believe that the wealth distribution in the United States is “unjust.” Majorities of Democrats (79%) and independents (55%) agree, but 67% of Republicans disagree.

Americans Believe Rich Create Value for Society; But Say People Admire the Rich Too Much

Americans admire the rich and believe they create value for society as they build up successful businesses that invent new products, create jobs, and provide value for customers.

Most Americans (62%) do not believe billionaires are a “threat to democracy,” including 79% of Republicans and 63% of independents. However, a majority of Democrats (54%) worry billionaires do pose a threat. Three-fourths (75%) of Americans also don’t believe that “it’s immoral for society to allow people to become billionaires.”

The survey finds the Democratic coalition is divided about socialism and the rich, with implications for the 2020 Democratic primaries. Liberal Democrats are about 25 points more likely than moderate Democrats to have a favorable view of socialism (74% vs. 49%) and to strongly favor raising top marginal tax rates (60% vs. 38%). Conversely, moderate Democrats are about 10-15 points more likely to feel more admiration than resentment towards the rich (65% vs. 48%), to believe the rich earned their wealth by creating value for society (64% vs. 48%), and to think “we’re all better off when people get rich” (58% vs. 41%).

A majority (72%) Americans say that even if government were to “spend whatever is necessary” to eliminate poverty it doesn’t “know enough” about how to actually accomplish that.

Americans Say Housing Is Too Expensive; 59% Support New Construction in Their Own Neighborhoods

A majority (56%) of Americans say that expensive housing costs have prevented them from moving to a better neighborhood and 44% rate housing costs in their current neighborhood as “bad.” This may help explain why a solid majority (59%) favor building more houses, condos, and apartments in their own neighborhood. 58% Favor Vouchers for K-12 Private School; African Americans, Republicans, Low Income Americans, and High School Graduates Are Most Supportive A solid majority (58%) of Americans favor a proposal that would allow parents of children in public school “to use a voucher to enroll their children in a private school” with “government helping to pay the tuition” while 40% oppose. African Americans (69%), Republicans (68%), households earning less than $20,000 annually (73%), and high school graduates without a college degree (64%) are much more supportive of school vouchers. Although majorities favor, White and Latino Americans (56%), college graduates (52%), and those with annual incomes above $20,000 (55%) are comparatively less likely to support school vouchers. Democrats are skeptical with 47% who favor and 50% oppose the proposal.

A majority (55%) of Americans favor and 44% oppose recategorizing drug offenses from felonies to civil offenses, such that they would be treated as minor traffic violations rather than crimes. Republicans stand out with 59% opposed. In contrast, majorities of Democrats (69%) and independents (54%) support decriminalizing drug offenses.

Americans Who Value Work, Responsibility, and Personal Agency Find Most Meaning in Their Lives

The survey found that 83% of Americans report finding purpose and meaning in their lives, while 46% strongly feel they have meaning. Some are more likely to strongly agree:

The survey also found that people with the following personality traits and beliefs are also more likely to find more purpose and meaning in their lives: those who strongly believe hard work is it’s own reward (74%), to strongly believe they have personal agency (68%), and to strongly believe in personal responsibility (60%), are very compassionate (58%), and are not very envious (70%) or resentful (63%).

Methodology: The Cato Institute 2019 Welfare, Work, and Wealth National Survey was designed and conducted by the Cato Institute in collaboration with YouGov. YouGov collected responses online March 5 to 8, 2019 from a national sample of 1,700 Americans 18 years of age and older. Restrictions are put in place to ensure that only the people selected and contacted by YouGov are allowed to participate. The margin of error for the survey is +/- 2.2 percentage points at the 95% level of confidence.

All images: The Cato Institute